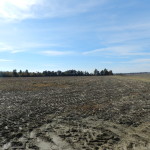 July 23, 1863 “It is altogether the best country I have seen this side of Springfield Mo.” Photo taken near Gainesville, Arkansas 2014

In the process of editing the journal, we had the opportunity to follow in Benjamin’s footsteps on a road trip that became a journey to remember.

While driving from Florida to Arizona, we could not resist taking a few extra days to see the countryside that Benjamin wrote about in his journal. What happened along the way was beyond our expectations. Some people would say our experience was just a series of happy coincidences, but others might say that Benjamin was on the road trip with us. We invite you to read our story below and decide for yourself!

With a rough draft of the journal in hand, we started off from Jonesboro, Arkansas hoping to pick up Benjamin’s path through northeast Arkansas. Benjamin’s description of where he was and what he saw enabled us to follow in his footsteps. At an intersection in Gainesville, Arkansas, we decided to take a side road. As we drove and read from the journal, we came over the hills and trees to a point where the land was level and good for farming, just as Benjamin had described it.

Eager to find the next stop on Benjamin’s trail, we jumped back in the car and headed off. Our goal was to find Chalk Bluff at the point where the Union Army crossed the St. Francis River. Being unfamiliar with the area, when we saw a gas station we decided to stop and fill the tank. Who knew when we would have our next fuel opportunity?

Unfortunately, and to the surprise of the clerk, each pump we tried was empty! As she tried to figure out the problem, she commented on our Florida license plates. We told her we were following our great-great grandfather’s Civil War journal. She said if we went back about a mile in the direction from which we had come, we would find a park with some markers. So we decided to try it. Backtracking, we turned off the main road onto a dirt road and soon came to a homemade sign that read CHALK BLUFF. 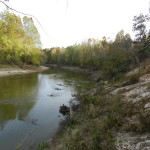 Following it, we came to a park next to the St. Francis River. A beautiful path led down to Chalk Bluff. Along the way historical markers provided information and identified the point where Union troops had crossed into Arkansas.

Had we not stopped, tried to get gas, and engaged the clerk in conversation, we would have passed this road never seeing the spot Benjamin writes about in his journal. We were standing in Benjamin’s footsteps.

We headed back to Jonesboro following signs for the Civil War Trail. 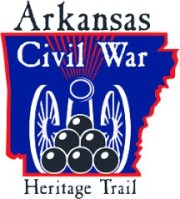 We turned into Harrisburg, Arkansas to take a break and decided that maybe the Harrisburg Public Library would be a source for information. The librarian provided some books for us to look through, but they didn’t give us any information about the exact location of Allen’s Ferry. As we were about to leave, one of the library patrons apologized for eaves dropping, but we were glad she did as she gave us our next clue regarding where to look.

After driving around, we ended up in Marked Tree, Arkansas on the banks of the St. Francis River. Thinking perhaps there was somewhere that had tourist brochures that would tell us about the area, we saw a municipal building and ran in to ask where we might find additional information.

A friendly woman sitting at the sign in for the jail – as technically, it was the municipal building/jail – suggested asking the mayor since she was in her office. After several rounds of “oh we couldn’t possibly bother her”, we headed around the corner to Mayor Mary Arnold’s office. Mayor Arnold had detailed maps and was a wealth of information about the St. Francis River around Marked Tree. Our meeting with her was delightful and informative.

Even though we didn’t find the exact location of Allen’s Ferry, following the journal on Day Two of the trip turned out to be interesting in so many other ways. 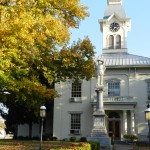 December 29, 1862 “Co (M) and Co (L) was left in Van Buren all night to patrol the town. I was in command. This patrol was to prevent robbing and stealing and to get the soldiers all out of town”
Photo of the current Crawford County Courthouse with its Civil War Memorial 2014

On Day Three of following the journal, we headed west to Van Buren, Arkansas eager to see the Arkansas River that Benjamin so vividly described.

Our first stop was the Van Buren Tourist center located in the old train depot. Armed with a handful of brochures, we walked to our second stop, the old courthouse. The original Italianate-styled courthouse that Benjamin would have seen was destroyed by fire in 1877; the current courthouse was rebuilt on the site using remaining brick walls. 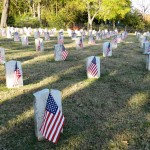 At the recommendation of the tourist center, we moved on to the beautiful historic Fairview Cemetery where many of the confederate soldiers who died at the Battle of Prairie Grove were brought for burial.

This took place on Veterans Day; the cemetery was decorated with flags. Standing among the old headstones, each with a bright new American flag, deepened the reality of the Civil War and the tremendous loss of life. 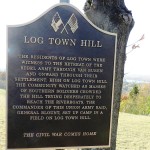 In Benjamin’s Journal, he described coming into the City of Van Buren and seeing the Arkansas River from the bluff, so we knew what to look for on our next adventure. Approaching Van Buren from the north, the road winds into the city, and the view is just as Benjamin had written–except in our case, without the 7th Cavalry and with significantly more urban development. After annoying other drivers by driving slowly with one of us hanging out the window taking pictures, we nearly gave up on photographing the view. To get one last picture of the Arkansas River before we left town, we decided that stopping, rather than driving slowly, might be the way to go and whipped into the parking lot of a dentist office. 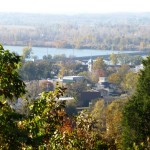 December 28, 1862 “We are now on the bluff in full view of the city of Van Buren which is situated on the bank of the Arkansas River. Here the site is beautiful to our eyes, beyond description. The Rebels, I presume, did not think it so nice as they was running pel mel down the bluff and our men taking them in at every jump and to add to their horror our two mountain howitzers was throwing grape among them at a rapid rate.”
Photo taken overlooking Van Buren 2014

Standing on a rock, determined to get the best picture possible, we noticed a historical marker partially obscured by trees describing the scene just as we had read it in the journal. After reading the plaque, we once again we found ourselves standing in Benjamin’s footsteps.

This trip was never supposed to have had a Day Four, as we had intended to start back to Arizona. However, we could not resist following the journal just a little farther north toward Prairie Grove. If we hadn’t already suspected that Benjamin was with us as a tour guide, Day Four left no doubt. Leaving Van Buren early in the morning, we traveled north toward Fayetteville. Just as we were thinking we should probably get back on track and head home, we saw the sign for Lee’s Creek and found ourselves on the path Benjamin had taken to Van Buren.

So against our better judgment, but with great enthusiasm, we continued north determined to see the battlefield at Prairie Grove.

After several wrong turns and the help of more wonderful people, we turned into the entrance of Prairie Grove Battlefield State Park. From the moment we entered the visitors/education center, we were impressed. The background sounds of cannonading in the distance gives visitors the feeling that if you looked out the window, the battle would be in progress just outside. Determined to learn as much as we could, we first stopped to watch the video explaining the significance of the Battle of Prairie Grove. 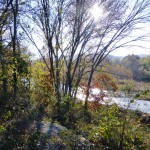 After learning what Benjamin had endured to even make it to the battle, we decided we needed to follow his footsteps onto the battle ground. Before venturing outside, however, we noticed the large display of Civil War books in the gift store. We asked the park representative at the reception desk to recommend a diary or journal containing first-hand Civil War experiences. Once he started sharing information, we knew we had asked the right person. Our path had crossed that of Alan Thompson, the registrar and historian at the Prairie Grove Battlefield. Alan talked with us for a while about our project and offered to copy his file on the service of the 7th Cavalry at Prairie Grove. Before we left to visit the battlefield, Alan described the direction from which Benjamin’s company would have entered the battle and where the company would have become separated during the fighting. We left our rough draft of Benjamin’s journal with Alan while we went out onto the battlefield. 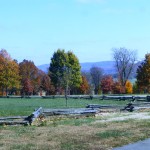 December 7, 1862 “When we arrived the ball had opened in good earnest. General Herron had arrived with his division and the battery.”
Photo taken at Prairie Grove battlefield, November 2014

As we walked on the battlefield, it was hard to believe that such a deadly confrontation had taken place on such a peaceful and beautiful pasture. To the north we could see the mountains Benjamin had crossed on the historic march, and the point at which Company M had entered the fighting.

After exploring the battlefield, we again met up with Alan Thompson. He was able to give us some valuable tips regarding additional resources and we discussed the difficulty of reading old penmanship. Alan invited us to contact him with questions and he continued to provide information and support as we began the final rounds of editing Missouri Volunteer.

December 7, 1862 The battle now raged beyond description. The deadly missiles filled the air. No mortal man could tell what would be the gain.”
Photos of Prairie Grove Battlefield 2014